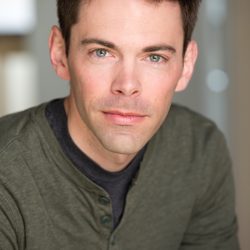 What’s your favorite (or extraordinary) skill that you had to learn for a show? I played Starveling in “A Midsummer Night’s Dream” at Shakespeare and Company in Massachusetts a few years ago. Starveling is rehearsing a play with a group of his friends, and it is his job to play, or present, the moon. On the first day of rehearsal, my director walked up to me, asked if I had any ballet experience and said “we were thinking that Starveling presents the moon on point, in toe shoes”. So for those next few weeks, I spent a lot of time learning how to go on point in toe shoes. I learned the tricks to making those shoes as comfortable as possible, did a lot of balance and calf strengthening exercises, and by the time we opened I could walk around the stage on my toes. One of those things that I never thought I would be doing, but it was so fun to accomplish.

Why should people come see “Aliens with Extraordinary Skills”? This is a play that deals with people’s need to be given a chance. Within that struggle there is love, loneliness, acceptance, fear of the world and who we are within it. Amidst all of these things, there is a great deal of laughter.

“Aliens” is the story of Nadia, who immigrates to the US from Moldova. How has immigration shaped your story, or your family’s story? My family is Pennsylvania Dutch, which are descendants of refugees that fled religious persecution in the 17th and 18th centuries. It is incredible to think that so many years ago, people I am related to took a very long journey based off of the necessity for a new opportunity.

Adam Gauger (Borat) grew up in Minnesota and started acting with Child’s Play (now Stages) Theatre. This is his second show with Theatre Unbound after performing earlier this year in “Mere Trifles”. He has worked locally at Old Log Theatre, Open Window Theatre, and Theatre in the Round. He has also worked in Massachusetts at Shakespeare & Company and The Wharton Salon. He studied acting at The American Academy of Dramatic Arts in Los Angeles, Atelier L.A. with Diana Stevenson, The British American Drama Academy, and Shakespeare & Company. Adam also is a musician, visual artist, and teacher.