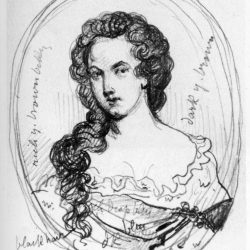 The English writer Aphra Behn (1640-1689) penned seventeen plays, four novels, and a number of poems and short stories. Of her plays, The Rover and The Emperor of the Moon are the most frequently staged today. Few facts about her life are known, although some of those we do know are sensational: she traveled to Surinam, she served as a spy in Antwerp for King Charles II, under the code name “Astrea,” which she later used as a pen name.

Her work had the reputation of being obscene. Alexander Pope, for instance, satirized her in the couplet

However, as noted by her biographer Montague Summers, Behn was being singled out for a quality she shared with a large number of her male contemporaries: “There are not infrequent scenes of Dryden, of Wycherley, of Vanbrugh, Southerne, Otway, Ravenscroft, Shadwell, D’Urfey, Crowne, full as daring as anything Aphra wrote; indeed, in some instances, far more wanton.” Behn herself dryly remarked that “there is a sort of Self-Interest in their [the critics’] Malice, which I shou’d rather call a witty Way they have in this Age, of Railing at every thing they find with pain successful.”

In the twentieth century, Virginia Woolf drew new attention to Aphra Behn in her essay “A Room of One’s Own,” saying, “All women together ought to let flowers fall upon the tomb of Aphra Behn, which is, most scandalously but rather appropriately, in Westminster Abbey, for it was she who earned them the right to speak their minds. It is she-shady and amorous as she was-who makes it not quite fantastic for me to say to you tonight: Earn five hundred a year by your wits.”

Recent scholarship has shifted the focus from Behn’s life – her professionalism, her reputation – to her work. Her fiction influenced writers including Daniel Defoe and Samuel Richardson and, through them, a succession of novelists all over the world. Her verse has been praised for its “complexity…its logical argument, pastoral and courtly conventions, biblical and classical allusions, and incisive social comment,” (Poetry Foundation) as well as its frank depiction of a woman’s erotic feelings for both men and women. Her plays remain lively, subversive, and delightfully funny. In summary, as Judith Kegan Gardiner puts it, Behn was “a pioneer in championing autonomous female desire, in speaking through an assertive, desiring, and changing female voice, and in showing women’s choices in a constrained social world.”