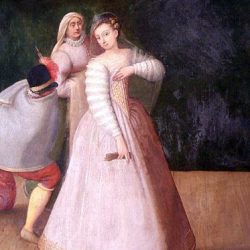 “No one pays attention to anything but the plays, nor do you hear anything among the people but the words: ‘I am of Flaminia’s party’ and ‘I am of Vincenza’s,’ and both houses fill up with parties of friends,” wrote poet Antonio Ceruto in a letter in July 1566. Vincenza Armani and “Flaminia” of Rome (most likely her stage name) both led theatre troupes, and both astonished the crowds with lavish spectacle, lively improvisation, and stories of honorable young women in love.

In 1568, Duke Guglielmo Gonzaga staged a contest between the two companies. Each presented a comedy, and the Duke selected the best performers, including Flaminia and Vincenza, to form a new troupe, I Gelosi, “to serve his family at home and abroad,” according to Frances K. Barasch. The troupe was active for more than thirty years and went on to feature other notable women such as Vittoria Pissimi and Isabella Andreini.

Kathleen McGill has pointed out that both women and the use of improvisation appeared in commedia at about the same time, and argues that this was cause and effect: women’s culture was oral, not written, and the female performers brought their expertise at oral composition to the commedia form. “Because the repertory improvisation developed by the commedia dell’arte of the sixteenth century influenced not only the Italian theater, but the theater of Moliere, Beaumarchais, and of the English Restoration,” she says, “attribution of the commedia’s improvisation affects virtually the entire record of theater in the West.” We may owe a great deal to Flaminia, Vincenza and their female colleagues.