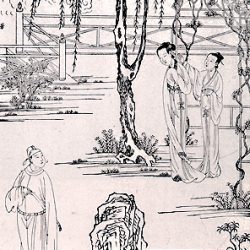 Fourteenth-century author Xia Tingzhi gives biographies of 117 female actors in his Qinglou ji qianzhu (“Green Bower Collection”). Many of these women “portrayed male military figures, demonstrating their artistic mastery of martial arts and acrobatics,” according to Chou Hui-ling, doing so even in performances with both men and women in the cast. The material they performed – zaju or “variety plays” – relied on songs and improvised dialog to carry the exciting plots.

William Dolby says, “This prominence of women, if such it was, must have been significant in creating a theatre radically opposed in style and manner to the Beijing opera in which male actors played all the parts, including the female roles. The multiplicity of vivid female lead roles in itself probably indicates the actresses’ salience, although conceivably it constitutes a chicken-and-egg dilemma.”

We don’t know why so many Yuan Dynasty women were able to pursue careers on the stage. One theory is that, when the Mongols under Kublai Khan conquered China, women of the displaced Han ruling class, faced with the necessity of earning a living, became entertainers.